On Sunday past, I jumped into the virtual world of SecondLife to perform a 1 hour live show at the brilliant Key West Resort music venue and for those of you who don’t know about SecondLife, its kind of hard to explain, but, Its an online avatar-based virtual world and In there people can buy and rent land and build music venues and have live musicians stream into the world at virtual gigs. There is a whole lot more to it than that but if you want to check it out and have yourself a virtual wander around then you can find all the info at secondlife.com

Here I am being a virtual shaggy, jamming out on a virtual Martin guitar in some wonderful virtual sunshine by the coast!

Shagpile Spyker in the virtual world of Secondlife

With the help of the lovely Lo Bloch Management I get a few live shows in there and Sunday was one of those. There was a great bunch of people in-world to listen in from people I knew in the past within Secondlife, when I spent a lot more time in there performing live music, to great friends who live not so far away from me in the UK.

Ron Bizzle is one of the first kind of those people, and I met Ron many years ago in-world as he floated around a lot of live gigs in SecondLife, documenting live performers for his YouTube channel. Ron lives way over in St. Louis, Missouri, USA but I had the pleasure of him coming to a couple of my live gigs with Growing Robots & We Steal Flyers in the UK and meeting him in person.

At the show on Sunday, a local friend Alan Cook was also at the gig in-world and Alan comes out to lots of local, live, We Steal Flyers shows around the UK and he requested that I sang an original song I wrote for the latest album ‘English Tea’

The two moments combined and Ron decided to film the song for his channel and out came this little video of me singing the song live in Secondlife. Here is ‘English Tea’ from the We Steal Flyers album ‘Applecart’ . If you would like to hear the studio version head over to Spotify to listen to the album here. As always thanks for checking in if you’re reading this and if you check out Secondlife be sure to say hello in-world.

Have a great and adventurous day!

In April this year, a post went up on Facebook by someone I didn’t know asking if any musicians would be able to record an acoustic cover of ‘Killing in the name of’ by Rage Against the Machine as a commission job for a couple who wished to have the song played during their wedding ceremony as they walk down the aisle.

Rage Against The Machine

A lovely friend of mine and music lover Sian saw the post and dropped me into the conversation with a lovely recommendation. I got chatting with the person who was dealing with it all for the couple and sent her a few YouTube videos over to check out my channel and before I knew the plan had been set.

So, my challenge was to cover ‘Killing in the name of’ and do it acoustically and send them the finished song. This week I’ve been getting busy in the Shagnut Studio Shack with it and to be honest it has been not only challenging but great fun as well! I love working like this and especially on something I would probably have never even had thought of either.

We’ve been sending posts back and forward in a group chat and checking out the progress and at the minute it’s pretty much there now. I am gonna add a little more guitar and some harmony in there and I reckon it’s sorted. I posted a snippet in the group yesterday and they are sounding over the moon with it so far so.. good news for me!

The wedding is on the 29th July this year and I’ve also decided to release the cover as a single on the same day of the wedding as a little hi-ho to the lovely couple who got me to work on this project and it will be out on most major platforms online! There will be a little explicit language so, unfortunately, no kiddies can listen in hahah!

Hope you are all well out there and looking forward to hearing the finished song!

My new Covers Album is out now and available on Spotify

Day 3 of the tour started off with a lie in as there was no free breakfast today! Derek was up and about showering while I dozed a little longer this morning and after the crazy curry last night my stomach felt like it was gonna burst open all over the bed sheets. Luckily it didn’t though and after a weird experience of joy, heat and pain in the bathroom I was free of the demon curry for a while! Hahahaha! T.M.I… It really was the hottest thing i’ve ever had pass my lips and its hard to explain the whole experience and what it was like in words….

Once we we’re both up, sorted and clothes and gear packed up in the room we headed down to check out leaving the smelly curry room behind forever. It was still better than the cleaning product smell that we found when we entered but i’m not sure the cleaners would agree with that when they arrived into the curry pit of hell after we left.

The Deezer Jukebox in the Ibis Hotel Bar in Bradford

We handed our keys into the receptionist and I spied a lovely, chrome, glistening coffee machine behind her at the bar screaming silently at me. It would be rude not to have one… right? We perched our butts on the stools and got two lovely Americanas in tall glasses.(I reckon we looked proper posh) It was then we noticed the iPad on a stand facing us and asking to be poked. I had a little look and realized it was a Jukebox ran by Deezer. Deezer is a streaming service online a little like Spotify where you pay a monthly fee and you can listen to music on there on your mobile devices but I had never seen the Deezer Jukebox setup before. Basically you can hit a search button and type in an artist and que up some songs to listen to via the bar speakers. The first thing we had to do was have a look and see if we were on there and we were! Both our albums were available for people to choose some songs to play in the Ibis Hotel Bar which is pretty cool. Then I thought i’d take a look and see how much we get paid for being on Deezer and letting people download or stream our music.

Whether this is a good thing or bad thing for musicians , I will let you make your own mind up, but its good to know Deezer are actually paying more than they’re competition and giving a little more back to the artists and creators out there. 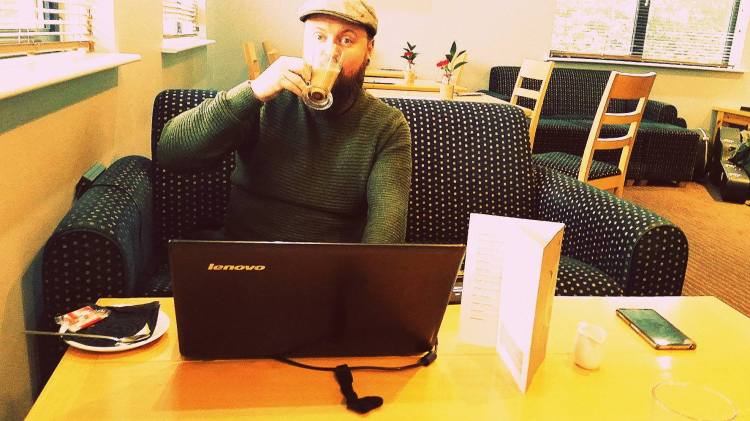 Getting the blog up to date on Amazing Adventures Always

After another cup of coffee each then we headed next door for some food at the bar and an awesome £10 for two meals special offer. I had a lurrrverly steak and ale pie with mash n peas and Derek was on the sausage mash n peas special! A quick phone call from Bry the lion and then we headed back to the hotel bar and hung around there for the rest of the day. I managed to get the blog up to date and got some messages out to blogs and podcast to get some tracks played on their shows and then we had a little competition to see who could get the highest score on Donkey Kong.

Derek won hands down and then headed off to walk around his table circle, making everyone in the bar dizzy while he did his laps. 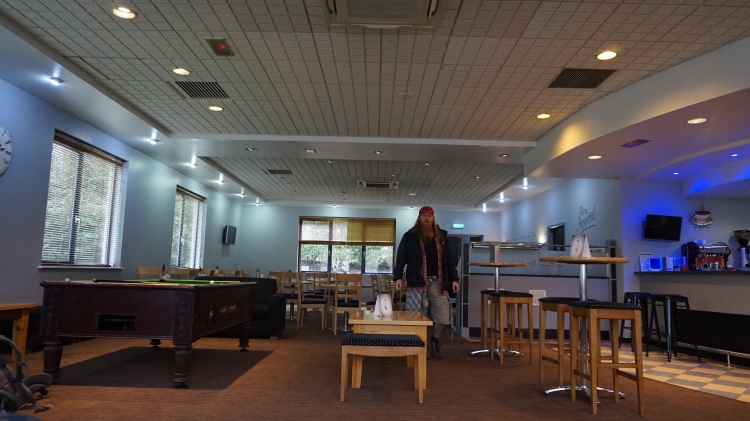 Derek doing his laps of glory!

It was time to head off to the next gig which was again another new venue called The Forge in Leeds. It was only about 20 minutes drive from our hotel and we landed in good time for a sound check and two pints of water. (ahh …the rock star life) The venue was a good looking place and a good size with a nice raised area for the live music which was on regularly. The first set didn’t seem to go by too fast as we were both struggling a little to hear again as the PA provided didn’t come with any monitoring system again. Its pretty important for us to be able to hear each other at a gig as there is a lot of vocal harmony throughout the songs. If its not quite right then it sounds completely wrong!! We managed though and the second set got a little more volume out of it and we were finished by 10.50pm. An early louse for the flyers and in good time for a 2 and a half hour drive back up to the North-east. We were in the car and on the road by 11.10pm. Derek grabbed his new CD he got for Christmas off Melanie which was a 2 disk special of all the ‘T.F.I Friday’ songs which had some great tracks on it. The drive home just seemed to dissapear in no time with lots of nosatlgic tunes blasting around the car and before I knew it we were having a cup o’ tea off Mel in Broomhill.

Derek stayed in the house and Mel headed to Bedlington with me to drop me off and I was back not long after 1.30am which was 2 hours earlier than I originally thought I would be. A quick hello to a sleepy Curly then I headed back down stairs for a vodka & coke , a ham and salad cream sandwich and a quick blast on Call of Duty on the Xbox One to wind me down for bed time around 3.30am.