Another great new gig to get under my belt this week. Rod Clements was one of the original members from the band Lindisfarne and for those of you who dont know who they are then youre probably either too young or youve been locked in the basement by your dodgy father who only feeds you on a sunday!!

Me and my beard!!

Anyways.. Derek from Acoustic Magic managed to sort this out for me and got us the gig supporting Rod Clements at Bubbles in Ashington…what a belta and it was amazing to share the stage with such a Legend!!!!

The running order was Clear Blue Skies, Hague, Myself and then the Fabulous Rod Clements who blew me away with his fingerstyle and slide guitar playing. Having already had a listen on his myspace I didnt really no what to expect from him playing solo but was pleasently surprised .. Damn he can play!!!!!!!

The night went great and Hague pulled a new song out the bag especially..  and also his Tightrope Walking song ,which was the last one he wrote I believe, is slowly becoming my favourite of his set!!

Clear Blue Skies had there usual mental banter about them while standing on one leg…. and Derek gave me a shot glass with a straw in it while I was on stage which…. turned out to be lager??? hahahha…  oh and it was also Hairys birthday so he got the dedication of Land Down Under on the night..

We also got the chance to get our photos taking at the end of the show with Rod and thanks to Terry T-Shirt for doing all the photography on the night once again!!

Hahaha Check out the finger!!

Hairy with his belly out!!

All in all another great gig for Acoustic Magic which keeps on going from strength to strength..

So to all the Acoustic Magic team , Rod Clements and Hairy for his birthday!!!

“Easy To Read” is my new album to be released today .. and is been made available as a FREE DOWNLOAD HERE.. or via my homepage.. www.shagpile.org 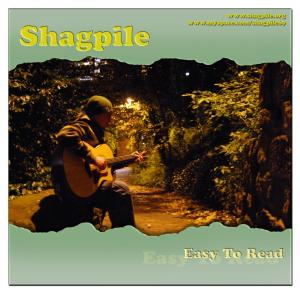 The album comes in a .zip file so its a one click download complete with the artwork…

The album was finished on New years eve morning and is only available free for a certain period so grab it while you can..

The Track Listing is as follows :

2. You and Your Lies

.. the last track was a co-write and the lyrics were written by Fiona Dunne..

Big thanks for the lyrics for fiona , thanks to Terry Mason for the photography work for the cover and also thanks to everyone for the support throughout the year..

Just thought id give you a quick heads up on my new acoustic solo album which is coming out soon…..

Easy To Read is the title for the upcoming album and is near completion now!! … The album will feature 8 tracks and should be hopefully released over the next couple of weeks.. check back for the dates!

The artwork is also nearly complete and you can see a sample below…. oh and thanks to terry mason for taking the photos down in Newcastle town centre.

Ive added below a sample track for you all to have a listen which is the title track from the album “Easy To Read” … so have a listen and dont forget to leave your comments below.

Easy To Read by Shagpile

The album will also go live on “CDBABY” once released and then on to the digitial distribution market…        i.e  iTunes, Amazon, Napster and such like .. currently both albums are signed up for 12 companies so if theres a preferable one that you like to use….. hopefully it’ll be on the list which will be coming soon!

The track listing upto now is as follows.. but may change over the next couple of weeks…

2. You and your Lies

Until the next BLOG .. enjoy!

So heres the Story! On tuesday afternoon tez rang and asked if I wanted to go for a walk around the toon (newcastle) later with our cameras to get some photos of the quayside by night with my guitar in hand , which sounded like a plan!! Some busking shots was the idea .. but the next thing that came into my mind was the hefty fines for busking in newcastle.. SO!! .. while waiting on terry I decided to give newcastle council a ring and see how to go about getting allowance to busk around the town centre. Within a 3 minute phonecall everything was sorted and a big thanks to newcastle council and steve patterson for this and also for sending me the info by mail!

So I was all set for busking.. and terry turned up with his squeaky brakes dead on time and off we went to the quayside in the freezin cold with our wooly hats and scarfs on!

After deciding to pull the guitar out down next to the bridge for some photos.. I ran through some songs while shaking to death as terry ran round me like a mad man with the camera.. 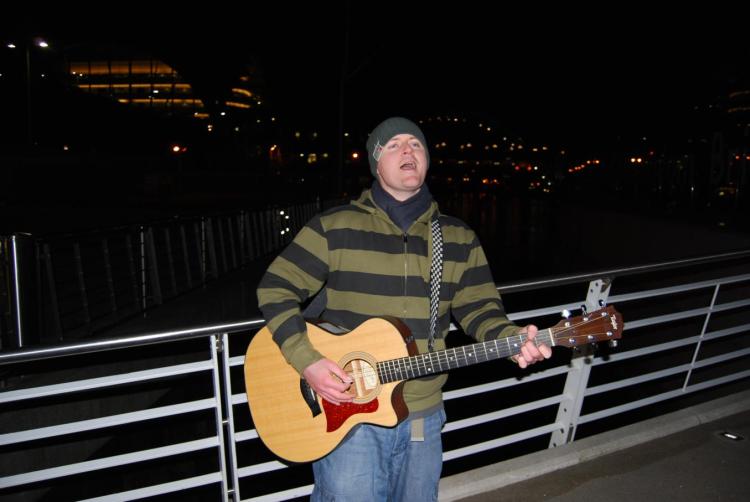 After 10 minutes or so a bunch of women appeared and hovered round for a bit listening while i chattered some songs while trying to feel my fingers.. they then came over and asked if they could take their photos with me , so over they came huddled up for some pics!! And here they are 🙂

Terry screamed about the website and being able to pick up the photos he was taking from there too, and i dropped the gals a CD and in exchange i got a nice crisp sky diver (Fiver) ..Woohoooooooooooooooo!!.. Thanks again for that!! 😉

Me n Terry then decided to pack up after the 15 minutes busking and find the nearest chippy to get rid of our winnings and try to thaw our bodys out whilst scoffing our faces!! That is after he decided to climb something and get his ass out !!

BRING ON THE SUMMER!! I cant wait to try more busking doon the toon!! hahahhahahahah

After the chipshop we went for a play around some strange creepy places with the cameras and a 50p laser light and ended up with some mad pics!! Heres the creepy place we found….

And our “painting with light” photos with the laser light!!

and some ramdoms from the neet!! 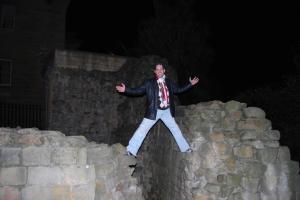 Till next time.. and HATS OFF TO ALL THE BUSKERS!!